There is no doubt that JIMI HENDRIX can still be called the inventor of modern electric guitar sounds that introduced one of the most creative phases of rock music. What made his sound so special was the combination of experimental rock music with the power of black music.
Five excellent musicians from Berlin collaborate to reawaken the spirit of JIMI HENDRIX, to play his music and to create new interpretations of it. Doing so, they skilfully imitate the freedom and anarchic, party atmosphere present in the big festivals of the 60s.

Till 2011 AHOI produced every 1st of january « The Happy New Year Start » with BERLIN HENDRIX BASH aka: Jimi Hendrix Memorial Nite. 2018 we plan it again 😉

REGGIE WORTHY – Bass Power from USA
He toured and recorded an album with Ike & Tina Turner. As singer, bass player and entertainer he toured also with other world famous stars: Justin Timberlake, Eric Burdon, Jennifer Rush, Stoppock, Howard Carpendale, Udo Lindenberg, Stefan Gwildis etc. His style eminates soul, funk and blues at its finest and is a powerful presence at any performance. Since he studied at New Brunswick Rutger University he is known as the Bass Professor.
At the moment he is working on the rock musical Voodoo Child.

RON SPIELMAN – Folk, Soul, Blues, classic R´nB´, Country, Jazz
There is no doubt that Ron Spielman is one of the most talented guitarists on the German music scene. His enormous versitility is truly his trump card. Playing his beloved stratocaster or performing with his acoustic band: Ron Spielman always presents his emotional songs on the highest level. This musician has already released 8 albums! Moreover, his songs can be found on over 9 albums of other musicians. “When I started playing the guitar, I played Jimi Hendrix. That has influenced and inspired my whole life.”

ANDREAS WILLERS
is known as a very talented guitarist with an extensive stylistic background. He has performed with international stars such as: Paul Bley, Louis Sclavis, Enrico Rava, Bob Stewart, Marvin Smitty Smith, Dave Liebman, Trilok Gurtu, David Murray. His output can be found on over 35 albums – his own as well co-operative bands for which he was a member. “Andreas Willers is able to set Hendrix’s topics into his own background without depending on former stereotype reproductions of Hendrix’ music.”
“Bizarre. Overwhelming. Enchanting. Exciting. Surprisingly independent…We can say that this is one of the most ambitious Hendrix projects, we have ever heard.”
’Man, it sounds like jazz guitar, James-Bond-guitar and all freaked-out noise at times. What a thrill!’ ( member of audience, Santa Cruz, California) 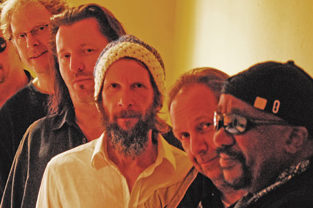