DJATOU TOURE is an accomplished singer who mixes African poems with modern Afro Beatz and hot rhythms that make us want to dance! She sings in many languages including Bambara, French and English.
In 2007 she won the Music Award Carnival Of Cultures Berlin.
Her repertoire consists of her own compositions, traditional songs from Ivory Coast and improvisations.
Djatou Touré was born in Ivory Coast in 1978 into a Manding family who believe in the goddesses of the earth, trees and nature. It is her belief that these godesses gave her the gift of a proud, dramatic and soulful voice and she must use this priceless gift by performing! Ever since she was a little girl, music has been her passion and she knew that through her love for music she would find her way in life, as she says – “I was meant to be a singer!”.
Her father’s friend owned a recording studio that Djatou used to visit frequently, he instantly recognized her vocal talent and encouraged her to make some professional recordings.
She studied at a well-known music college in Ivory Coast, Ecole Nationale des Beaux Arts and is member of the Burida (National Syndicate of Musicians of Ivory Coast, Abidjan). She studied under Professor Atta Kouassi (head of the National Orchestra of Television of Ivory Coast). She contributed to the musical telecasts ‘Premiere Chance’, ‘Podium’ and the musical broadcasts ‘Vacances Culture’ about traditional African dance events. She formed her own band ‘Novo-Group Quartett’ in Abidjan, which gave several live performances with world class musicians such as: Koumba Sidibé (Mali), Tiken Jah (Ivory Coast), George Makintosh (Liberia) and chorus of the groups ‘Les Woudy’ and ‘Blebo & Co’. In 1995 she attended Village Ki-Yi Culture, a renowned creative foundation in Abidjan, to study dance, music and theatre. One year later, in 1996 she began performing on concerts all over Europe.

Another issue DJATOU TOURÉ puts all her heart into is the campaign against female genital mutilation, she is deeply involved in this cause. „32 girls could not been saved, but the generation of today can STOP this ritual!! “ (D.T.)   Through her music Djatou wants to raise awareness to this problem that devastates millions of womens’ lives across the world.  Working with Terre des Femmes + Amnesty International. 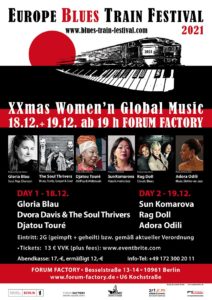