The three musicians have been playing together since 2016, but the name MaKaTo is new 😉

Maciek Pietraho
born in 1953 in Kielce, Poland, comes from an artistic-mathematical family with political impulses. At an early age he showed versatile talents (artistic, athletic, humanistic), which were crowned with success (painting exhibitions, concerts, sports competitions).
He always had a rebellion and clear values ​​within him, which he is still guided by today.
At the age of 17 he ran away from home to be engaged in music, to write, to create what is in his soul.
In music school he learned the violin, bassoon and transverse flute.
The training of Henri Wieniawski music studies in the guitar class represented a very important turning point.
In fact, Maciek is an orchestra man and everything he touches turns into sound and music.
Many consider him a legendary figure on the Polish music scene.
He had part and influence on punk rock, folk, jazz, blues in Poland (Złoty Cielec, Światowy Ząb with Walek Dzedzej, Andrzej Zuzak (punk rock), folkie band with Tomasz Winiarski, Dariusz Gołębiewski, old jazz band with Mirek Dołowicz, Jan Gostkiewicz Band with Ela Mielczarek and Ruciński).
From 1970 he was the author of texts and music and took part in theater projects with Ewa Benesz, Magdalena Ziemska and Małgorzata Starowiejska (Mao Star), music and film productions (Gnoje, Kowalski meets Schmidt, Berlin at night, Maciek, Dana Lech), both in Poland as well as in Europe. 1979-80 he was a jury member at the festival in Gostynin (Poland).
His attitude and rebellion have inspired many artists.
A particularly intense time was in the 90s when he played with the band Jak wolność to Wolnosc (2000 Fryderyk nomination).
In Berlin he played with the New Prohibition Band, Romano Swing with Katjusha Kozubek, Krzysztof Rudowski (Django Reinhardt, Gipsy Folk Swing), with Laura Bean (Bluegrass), Owoce Lasu Band, Tarara Band with Katarzyna Wieczerzak and Magdalena Bialoch.
He currently plays with Illegal Boys and MaKaTo.

Katarzyna Wieczerzak
born in Świdnik, Poland, graduated from the State Music School in the violin class in 2004 and studied double bass, among others, at Zbigniew Wegehaupt in Warsaw.
She is a poet, musician, pantomime & actress and choreographer for physical theater.
In 2017 she completed her training in pantomime / mime and physical theater at Die Etage – School for the Performing Arts Berlin.
Since her youth she has been on stage as a theater maker and musician.
In Warsaw she was part of the ensemble of Theater Nacht Linie, Theater Marebito and Theater Remus. She also played a.o. with UmZikßi Theater, Circo Matrioshka, Technomarmelade and Panthea Mime Theater (with Miriam Flick).
She worked with Owoce Lasu Band, Tarara Band, Janio Gypsy Band, Kudesy from Berlin and the group Problems de Luxe.

Tomasz Krzyżanowski
born 1983 in Gorzów Wielkopolski, Poland, grew up with Roma and jazz music. His father Zbigniew Krzyżanowski was also an active musician, i.a. Accordionist who instilled in him the love and passion for music.
In 1994 he graduated from the State Music School in Gorzów Wielkopolski in Poland, level 1, in the accordion class and in 1998 he graduated from the violin class. At the beginning of his career he was connected to his father, with whom he played in the Janio Band (Gipsy Music) and then got involved in other music projects.
Concerts with Katjusha Kozubek and Jonny Herzberg at many festivals with Romano Swing (Django Reinhardt, Gipsy Folk Swing) were important influences.
Collaboration with The Southern Flavor Show, Laura Bean, Maciek Pietraho (Bluegrass), duo with Krzysztof Rudowski (entertainment music), Sunny Side with Jurek Kudlik, Beata Kuczyńska (standard jazz), Thagar (gypsy folklore) from Poland with Artur Szewczyk, Katiusha Kozubek, Damian Szewczyk, Anna Dębicka, Tomasz / Przemek with Przemysław Raminiak (Standard Jazz). 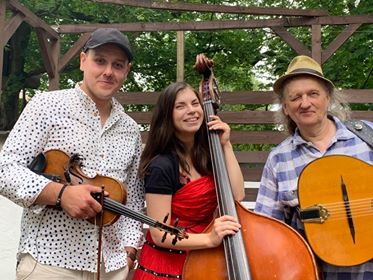 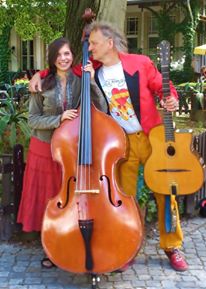